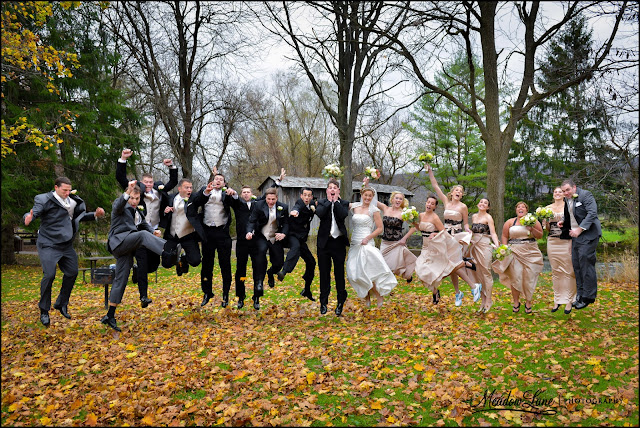 Truth be told, I'm not a huge fan of the trendy poses currently being photographed by, seemingly, anyone and everyone that owns a camera...which is pretty much anyone and everyone these days.  Don't get me wrong...some of those ideas are funny and creative, and with the right person, couple, or group, it could really work for them.  But that's the fundamental key...it works well for them...but will it work for you?  Does it represent your personality?  If a best friend or family member saw that image, would their first reaction be "that's so you!!", or would it be "what were you thinking?"

So the "jump" pose is not one I do or recommend for every wedding that I photograph.  And I haven't yet met a couple that wanted to do the "sofa chair or love seat out in the middle of the road, or a cornfield" pose.  But if it fit the personality of the subject I was working with, I wouldn't be opposed to taking that image.  The fact that I haven't taken that image yet makes me think it's more a photographer thing, than a client thing.

Too many photographers, today, see something that appears to be new and original (usually in a trade magazine or from a competitors web site) and then the very next session they have on their schedule they try to recreate the idea for their portfolio, without regard as to whether or not it's something that their subjects want to do, or fits their personalities.  I can tell you that from many of the pre-session interviews that I've done through the years, it can be a very polarizing thing.

And it can be a difficult thing to balance out the need to be creative, and to try out something new, from the photographers mind, compared to the need to photograph their clients in the most representative way possible.  Getting out of the box in a session is never a bad thing...it's getting out of the box in another area code that becomes problematic.

So we tried it a couple of times, to various degrees of success...did I mention that it was cold, and wet, and my subjects were nearly numb?  The fun fact about this image, is that this is the first one that I took, out of the batch.  Feather in my cap, yes, but for a dynamic photograph like this, that rarely happens, but I'm very happy when it does, for another important reason.

I've noticed through the years that the energy levels for each pose are generally at their highest for the first few pictures in any set.  If you have to take the image multiple times (and with large groups this is usually always the case) the chances of getting that energy back by the 15th time, for example, is nearly impossible.

In the moment, it was obvious that when they were jumping for the fifth or sixth time, it was never going to happen to get them all in the air at one time, again....they were tired, and the alcohol was kicking in, and oh yeah, it was freezing cold out there...but those attempts are important, as well, for those pictures are often more for the silliness that happens when they can't do it, which sometimes is a better picture than when they can...and you learn to keep the camera clicking during the failed attempts, as well. :)

So they jumped, and it was epic, and so far the response on my Facebook page has been very positive, which is always a good sign.  When the image matches the group, what could go wrong??  Well, that's a story for another blog entry....LOL!
« Previous Post Next Post »